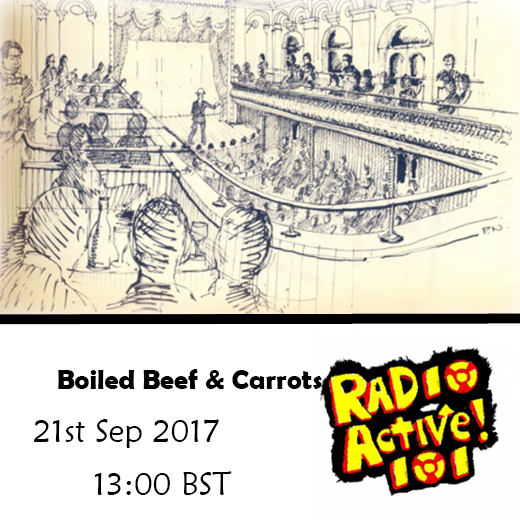 RadioActive101 brings you ‘Boiled Beef & Carrots’: Exploring live music halls in London.  The music professionals of UEL’s performing arts degree course investigate the renewed interest in Music Hall such as in Wilton’s in East London and the resurgence of a new wave of traditional variety theatre.

“By the end of the 19th century, the response of artists and intellectuals to the city had changed. No longer the delightful Georgian mix of country and town, no easy communication with the countryside; it no longer stimulated creative responses; it had become an enemy, full of slums, poverty, chaos, etc. In contrast, the suburb stood for what the city had lost: the stability and virtues of a village and family life; the suburbs were safe and charming.

The Victorian middle class preferred the suburb with its privacy; the affluent still favored the city for its diversities, novelties, and range of pleasures; department stores like Harrod’s; music halls, theatres, restaurants, concerts, Gilbert and Sullivan; museums; great newspapers; and the tourist and postcard industries. Pleasures for the working classes: sports, especially soccer; free museums, public lectures, open-air concerts. All such were lacking in the suburb.

Above all, city dwellers had to adjust to a rapid pace of change and uncertainty; hence to survive, one had to be flexible and independent; hence London often attracted the rural young and women, who had the opportunity to earn wages as clerks, shop assistants, and factory girls; many also found employment in the suburbs as domestics or gardeners.

Population
This was Victorian London, the capital city of England and the seat of the largest empire in the world. For most of this period London was still filthy, Cholera and TB were endemic, life expectancy only some 20 years and crime was out of control. Population growth was partly to blame (1 million to 7 million in the 100 years to 1900) but so was the indifferent attitude of the rich to the poor. This included the Queen (Victoria) and the government. The well off never visited the poor areas. In about 1800 the rich, middle classes and the poor lived within a few minutes walk of each other where the poor could walk to work to serve the rich as carpenters, drapers, shoemakers etc and they would all visit the same church (there were hundreds of little parishes in London). By 1850 or 150 years ago the population had grown to 3 million, the rich and middle classes were moving out of the centre to the “best new streets” “never again” to visit the areas occupied by the poor. It was then considered too dangerous!”